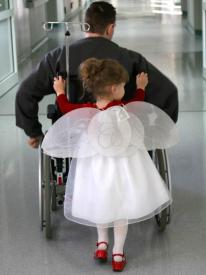 Above is the photo for this week’s blog hop. Below is my story that goes with it. This was a hard one to write for some reason. I cannot quite put my finger on why. I’m not entirely sure about it, but in order to comply with my own advice about not judging yourself when it comes to this exercise… I shall say nothing more and just let be what it is. Enjoy.

Stephie’s rhythmic footsteps echoed down the sterile hall of the VA hospital as she pushed her Uncle Joe in his wheelchair towards the courtyard. She’d worn her special ruby shoes to help Uncle Joe feel better. The sparkly red always made her happy, so surely the shoes would make her uncle smile too. She loved Uncle Joe so much and was sad when she heard he was hurt. Mama always said Joe shared a mutual bond with Stephie. She didn’t really know what that meant, but every time Stephie sees him her heart feels like it’s laughing, and she just wants to crawl into his comfy lap. It would be easier now that he was sitting all the time.

“I’m gonna push you to the garden Uncle Joe. It’s sunny out there. Okay?”

“Thanks Stephie,” replied Joe, discretely helping her by pushing his chair from the front side of the wheels.

Sweet girl, thought Joe. Every time he thought his love for her had peaked, he found his heart only grew deeper in love for her. He loved Stephie as his own.

His brother’s daughter was a  wise and sprightly girl. After a hydroelectric accident had killed his brother, leaving baby Steph and her mom alone, Joe swore he’d watch over them in honor of his brother. He’d bought land near the girls to operate a lucrative livestock business in an effort to build financial security for all three of them. He was successful in setting up a solid, growing foundation before being called overseas when the war began. Joe was devastated when he got his deployment orders, but he’d been able to get his affairs organized for the girls in case he didn’t return. They’d be alright.

Thank God he did come back. The problem was the girls were now taking care of him.  He had no choice but to swallow his pride and let the roles reverse, for it was the only way he could follow through on his promise to watch over them. They worked so hard to care for him. Stephie and her mother even took him to a nearby geothermal spring for his therapy once a week. He felt like a burden, yet could not bear to be away from them.

“’K, Uncle Joe,” Stephie said cheerfully. “Isn’t it pretty? Let’s look at the pond.” She suggested and curved him a few feet up the stone path.

“Perfect idea. Thanks for wheeling me out here, honey,” Joe replied with a warm smile, hoping the intuitive youngster couldn’t read his mind.

Stephie climbed into her uncle’s lap. She breathed in his soapy scent and rested her head on his shoulder as he wrapped his strong arm around her petite four-year old frame. They sat in silence, each thinking of ways to make life better for the other.